The Cyclades are some of the most diverse areas in the Aegean, they offer some of the best island hopping possibilities.

Every day a new Island with a completely different character. Villages and cities with whitewashed cube like houses, sometimes located right near lovely coves, like in Mykonos or Paros, or even seemingly stuck to one of the mountainous islands with steep slopes and cliffs, such as Santorin, Siphos or Ios. Sleepy Greek cities alternate with imposing old towns. Any one who appreciates the excitement of turmoil and enjoys to go out, should head for the tourist hot spots Mykonos, Ios or Santorin. Sailing from mid-June till early September is determined by the powerful Meltemi, which usually is perceived as cool and further more it usually brings clear skies and sunny weather. Anyone, that would prefer a more quiet and relaxed cruise should come before or after this season, when there are ideal sailing winds and lower tourist numbers.

In order to fully benefit from the dominant Meltemi, a trip is recommended, which is heading in a clockwise direction around the islands, starting from the east. In this way the crew will be able to better plan their day, with the possibility to simply skip an island as they go.
A tip from before: If a strong Meltemi is expected, do not forget to plan your way back prior to your trip, since it will be against the wind, 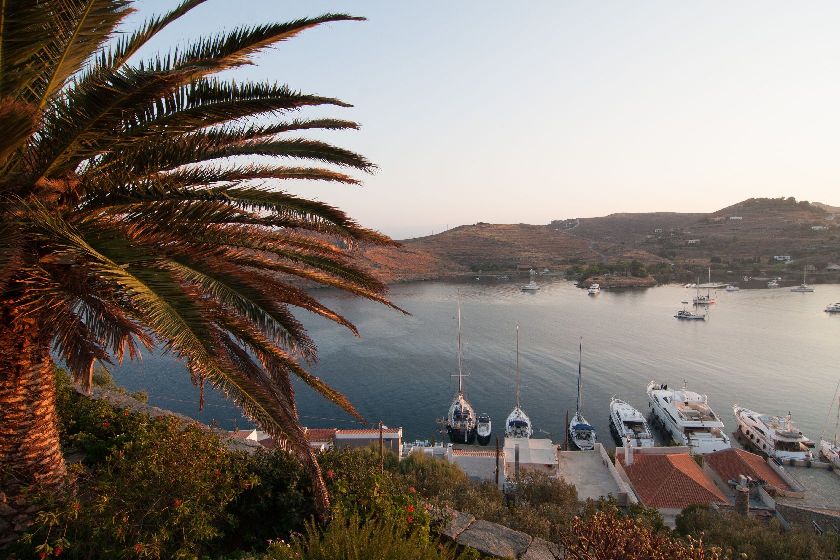 Kea, Nikolaou bay
However to start with, usually there is a wonderful wind, which will lead you through the beautiful blue Aegean. For sailors which plan to depart on Saturday, it is worth to mention that: The beautiful bay Nikolaou, in Kea, is a great destination to visit. Nikolaou is much more calm and more beautiful than Lavrion. Sailors wanting to starts on Sunday can alternatively sail to Kythnos, where the beautiful anchor bay Kolona can perfectly be used as a first bathing stop, or for a quiet first night. Crews which would like to stay in a harbour have to sail another 10 miles towards the small fishing village Loutra, on the north side of the island. Berths can be found at the pier in front of the bow-anchors. Good restaurants along on the seafront. 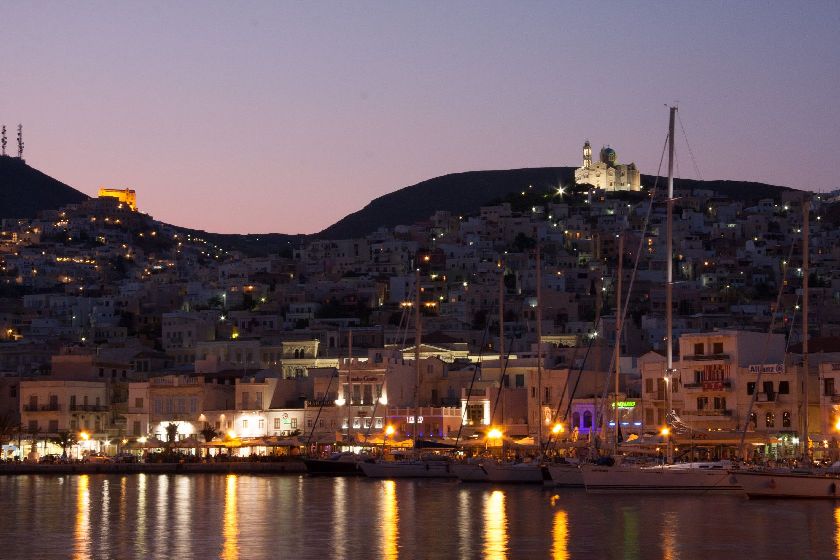 Ermoupoulis, the Capital of the Cyclades

Syros, Ermopulis or Ohoinikas, ca. 21/29 nautical miles depending on the days destination.

The capital of the Cyclades, Ermoupulis, lies scenic on a curved mountain ridge. On the hill above the harbour sits a church. Whoever enters the city port into the vigorous island centre, will immediately find themselves in the lively promenade, ideal for crews that fancy some entertainment. The neoclassical buildings, create a great scenery in the old town. The ferry terminal and main road parallel to the shore make it restless at night and therefore should you be seeking peace and quiet, you should go to the good jetty at the port of Phoinikas in the south-west of the island. The city can easily be reached by taxi in only about 20 minutes. 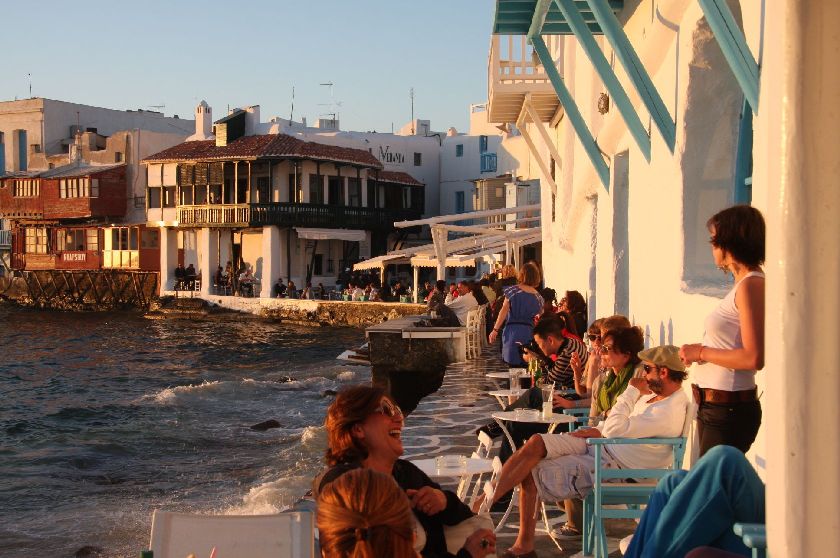 Mykonos, Little Venice
The sunset which can be watched from Little Venice, the small historical centre in Santorin, at least once, is a must for any fan of Greece. Besides countless Windmills, the harbour area offer a vast variety of modern coffee shops and clubs. In the evening, this is where it all happens when it comes to parties and night-life. From experience, these are very full in the summer months. Secure moorings opposite the cruise terminals. Yachts are not allowed in the old port. Mykonos is perfect for sailors who want to turn the night into day. Tip: Make sure to visit   the excavations in the old temple in the morning!

Paros, Naousa 21 miles
Naousa is one of the most beautiful old fishing villages in the Cyclades. On the north side one can find a tiny pool located directly near the old village, after which one may find one tavern and bar after the other, the old wooden fishing boats lie on the pier. In the evening the charming city awakens and becomes a place full of life. The yacht is safe and quiet at the marina next door. There are even usable sanitary facilities, which is a rare case in the Cyclades.

Antiparos or Siphnos, Vathy about 21/33 miles 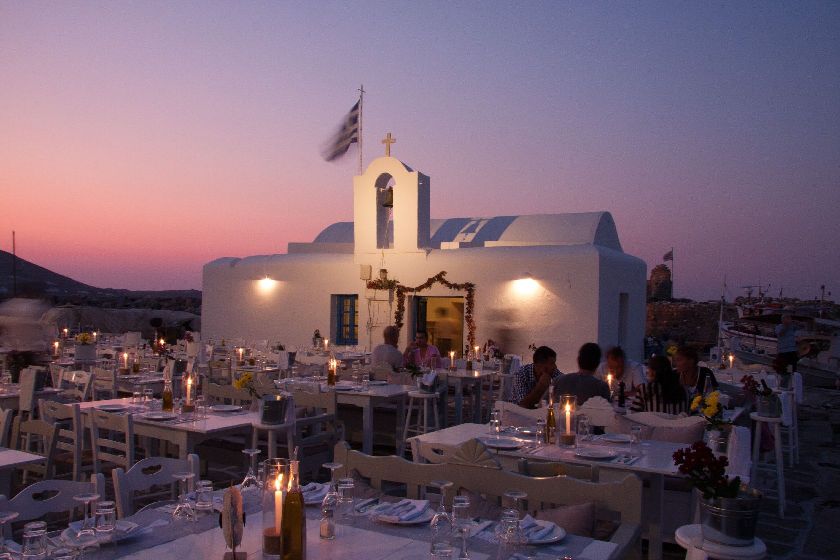 Paros
Between Paros and Naxos, the Meltemi can be rough , so its best to set sail with her in the back. A perfect anchor-stop awaits you on Antiparos in the Despotikou bay: water in all shades of turquoise, on the banks one can find a beach and a very good tavern. A relaxed place for the night. Whoever does not want to stop so early, can sail on to Siphnos.
Anchor tip: The Bay Pharos. Alternatively: Around the south-western tip, in to a perfect bay before the village Vathy. Sudden fall of gusts may occur in the bay, but a well run-in anchor and sufficient chain secure the anchorage.

Eriphos, about 15 nautical miles Seriphos
A short distance away, heading towards the wind of the Meltemi, one will reach Eriphos, a steep island, whose main town is located on top of the mountain. The exhausting and sweaty climb is worth it, the view on the top is fantastic. The anchor place is often effected by a powerful winds, however late in the evening it usually calms down. This anchor place is far better than the narrow jetty, against which the wind is constantly pushing! Better to swing freely and give more of the anchor chain. 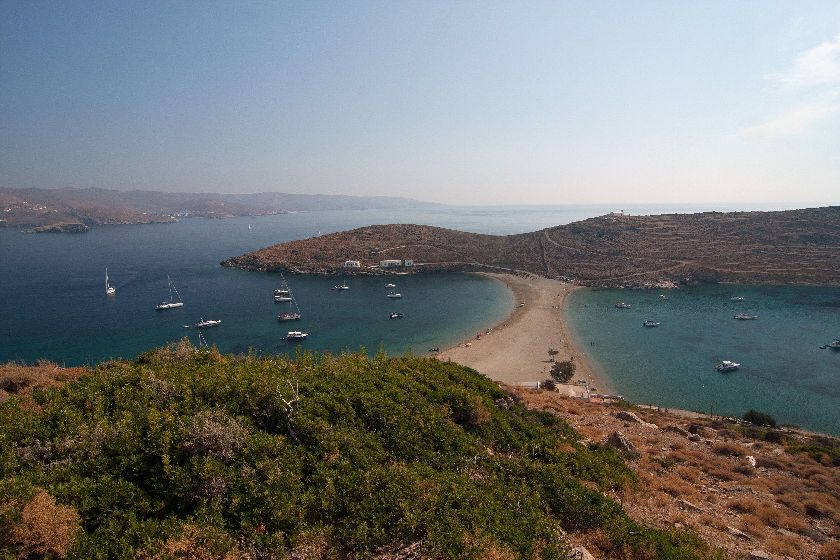 Khytnos
Great that Kythnos has yet another worthwhile destination on the west coast. Merida is a nice harbour town, with berths located at the pier in front of the bow anchors. The friendly landlords of the local taverns, will gladly help you and often they also have power for your yacht. Around the bay there is a long stretch of bars, shops and restaurants, the hype is but moderate. If the Meltemi is too strong, it is uncomfortable at the pier.

Kea, Vourkari 20 nautical miles
If you prefer to laze about, rather than sailing the last night before the return day, make your way up to this destination, already a day before. This recommended stop close to Lavrion. The bay Nikoalou at Vourkari is an ideal starting and stopping point for the last day in case the Meltemi blows strong. She is popular with the Athenians, who like to escape the summer heat of the city, and on weekends a pulsating excursion. Berths at the pier or anchor free.

The large round about 330 nautical miles Cyclades
All those who would like to spend more than one week, can easily add a few more stops from the small round starting from Paros, towards the south and get off at the first Siphnos Itinerary again. In this way the other stops and highlights become possible, such as: Milos, Naxos, Ios and especially Santorin.

The Kouroupa bay in Naxos
The greenest island of the Cyclades, at the foot of the ancient rock, is a wonderful contrast to it's neighbour Paros. Right at the harbour the old town begins, which is steeply ascending and winding around the mountain. Well worth seeing, but the port is miserable. Tip: Following this one can visit, the so-called "small Cyclades", which are the five small islands of Naxos, very authentic!

Ios 25 nautic miles
The island has the reputation of being the party capital of the Archipelago. Backpackers from around the world meet there for long nights. In summer it is noisy and turbulent. However, the picturesque old town, high up on the mountain, is a dream and worth seeing. In the off-season the turmoil decreases.

Sunset near Santorin, Oia
A dream destination of many Greece fans. The spectacular images of the city on the dark rock, of the old volcanic crater, which almost everyone knows. The old houses and the many bright blue domed churches, look like swallow-nests which seem to cling on to the rock. Unfortunately, the beautiful island has two issues: huge tourist rush from cruise ships and bad moorings! The best tip: The anchor tonnes at the foot of Oia, in the north of the bay.

Santorin, Oia
Attach a line a line from the bow and an enormously long stern line. Important: The line going to land, should not be placed across to the large pier where the ferries are, but next to the breakwater on the right. The plastic-mooring-barrels are private. The place is worth all the effort. Oia is almost a better alternative to the capital, otherwise a taxi or moped could be used to get across. The flow of tourists from the cruiseships leave after 17:00h.

Klima, Milos
The island was once a volcano, this can be noticed when looking at the beaches in the south, with mineral-rich rocks in all sorts of colours from yellow to red. The relaxing main town provides good berths. If the wind permits it, make another stop in front of the area Klima. Ydillic atmosphere.

The main departure bases to start your Yachtcharter in greece:
Athens
Lavrion