Looking for a new charter destination on the Mediterranean Sea? Then you probably already have looked over these areas many times and went back to booking more familiar destinations. However who decides to skip or ignore the Aeolian Islands simply due to the lack of willingness to experiment, is clearly missing out on a unique experience.

The islands off the northern coast of Sicily, are a piece of Italy at its best. Named after the god of the winds, Aeolus, they perfectly combine, nature and southern European way of life. They are also called the islands of Lipari, named after the main island of Lipari. In the summer months it is the dream destination of Italians, which in many cases visit these islands on their private yachts. Why Lipari is so well attended, becomes obvious immediately when visiting the old town from one of the various piers, which is flanked by a castle on a cliff. Attractive shops and well-attended restaurants line the streets.

Lipari, the main island of the Aeolian Islands
Hardly less attractive is the neighbouring island of Salina, which is also very popular for that matter. It also offers a small marina for speedboats. Smaller and more manageable, are the west adjoining islands Filicudi and Alicudi. Crews will also be able to find berths and restaurants ashore, if the weather condition permits it. The Aeolian Islands are less known amongst sailors because of the already mentioned islands, but because of Stromboli in the north and Vulcano in the south, which are two active volcanic islands.

If all that is not enough, you can easily enrich your trip by passing through the straits of Messina, whose mighty currents and whirlpools were already described by the Greek poet Homer, in his legendary stories about the fate of Odysseus, more than 2000 years ago.
The starting point for the cruises is always Portorosa in Sicily, a tourist complex surrounded by a network of canals connecting them to the sea. There are also many small marinas nearby.


The most important destination:
Vulcano
The 500 m high island is just too temptingly close to the coast of Sicily, 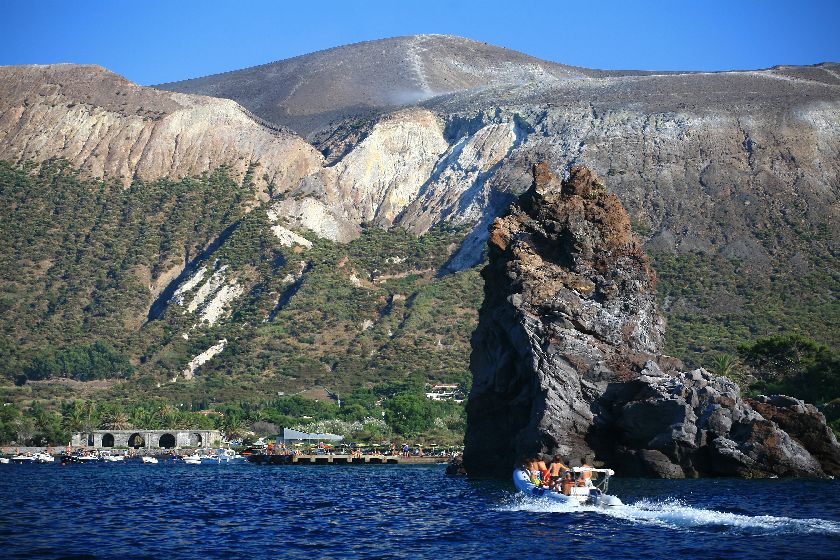 The island Vulcano
that you would consider to omit the first possible target, if the weather plays along. As the name suggests, the island has a volcanic origin. While there is no fiery eruptions like at Stromboli further in the north, there are however bubbles and smoke coming out of many places of the volcano. Above all, it smells and stinks of sulfur- more than at Stromboli. Nevertheless, a great experience, especially since you can climb the Vulcano on your own. There are two bays ideal for anchoring, one in the northeast (Porto di Levante) and the northwest (Porto di Ponente), there is also a floating dock for yachts. On land one may find all necessary supplies.

Lipari
The eponymous harbor town is the epicenter of summer tourism. For yachts there are several piers belonging to several different operators. Almost all of them are in close proximity to the ferry terminal. The swell caused by the constantly arriving and departing fast ferries is considerably high. However the typical southern-Italian hubbub of the grown city compensates for it. The atmosphere around the central street of Corso Vittorio Emanuele II, which connects two ports, usually makes people want to stay. To stay on board and to be shaken around by the swell should be reconsidered. Either way it is better that way, since there is still much more to discover.

The harbour of Lipari

Salina
Santa Maria Salina on the east side of the island can almost compete with Lipari, especially since the marina is even protected unlike many of the marinas in Lipari. However the marina is very expensive. In the summer months, a charge of 160 EUR for yachts up to 44 feet and even in autumn it still costs 70 EUR. However it is possible to anchor on the south front of the harbour. Before Rinella south of the island one can anchor southeast of the pier, good holding ground.

Alicudi / Flicudi
The two islands in the west are a dream of peace and solitude. On a week long cruise, one will often have to decide which of the two to visit. In Filicudi there are good moorings at the ferry docks and buoys for ca. 40 EUR / night.
In Alicudi, it is only possible to anchor in 6m depth, in the southeast and only if the weather is calm, during the night it is possible to dock at the pier once all ferries have left. There are slightly elevated restaurants located near the pier. As it is in many of the Aeolian Islands, the anchor ground is rocky and falling apart.

Panarea
A popular stopover with a known anchorage in the southwest of the island, Cala di Junco, restricted to the south by a rocky outcrop. No secluded swimming area in the southeastern part of the Cala di Junco, therefore it is also the best place to anchor. More secluded to the eat is the more open Caletta di Zimmeri which has a beach restaurant.

The active volcano Stromboli
The highlight in the Aeolian Islands. The active volcano is referred to repeatedly as the oldest navigational light of the Mediterranean, its often fuming cone towers over 900m. But actually it rises to 2500m high, because the surrounding seabed is on average 1500m deep 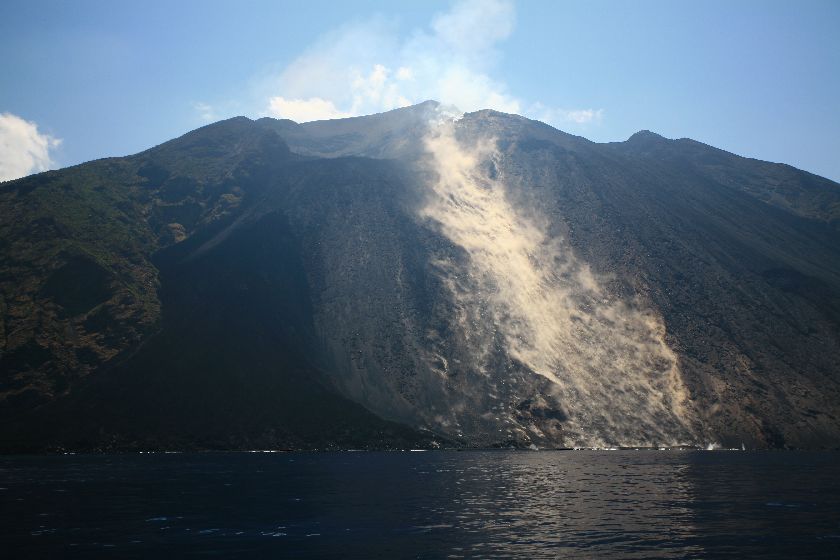 The fireslide
You should leave enough time to either engage in a sporty climb to the top in order to watch the 200m high fire and lava fountains, or else to walk around the volcano at night, including a visit to the so called fireslide (Sciara del Fuoco) on the Northside. Further north you may find a buoy field Pt. Della Lena. The activeness and strength of the Stromboli varies greatly. 2007 there were major eruptions, which even effected and partially damaged surrounding towns on the island. This was followed by quiet years, until 2014, when the volcanic activities started to increase once again. This time they were more concentrated towards the side of the fireslide, therefore guided tours had to be canceled. South of the ferry terminal, in front of St. Vicenzo, is the best place to anchor if the wind is north bound.


Messina, passage of Messina
The passage, when the weather is good, should not be missed, however it is important that this trip is well prepared and focused. 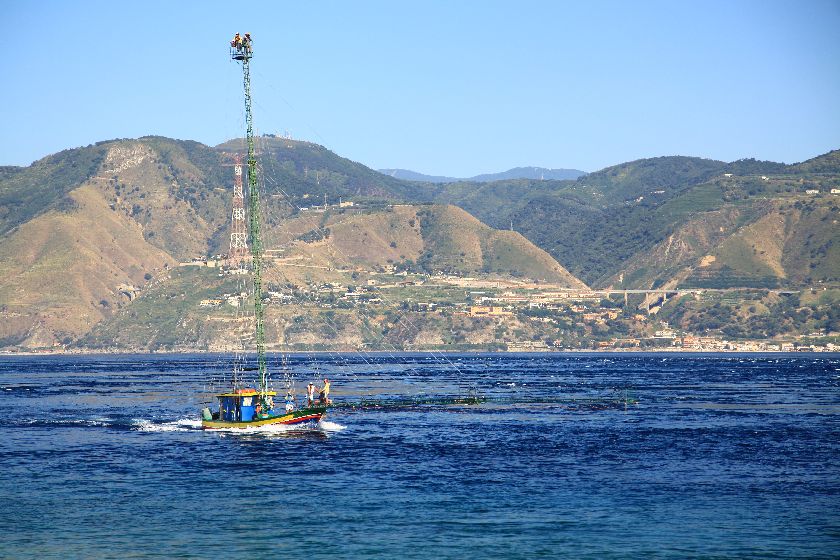 Fishing boat in the Messina passage
The swirls and currents are very impressive, as well as an encounter with the local fishers, which are trying to catch sword fish from their fishing boats, is a unique experience. Additionally the ferries which are constantly commuting between southern Italy and Sicily. You can berth in the marina of Messina. The most beautiful areas in the town are located around the cathedral.


Milazzo
To call this town the industrial stamp town (east refineries) does her wrong. Milazzo, is much more than an ideal stop between Messina and Portoros. A beautiful old town (with a fischers-alley, where you can find fresh swordfish!) A promenade by the sea and an elevated part of town where the old cathedral is located. Most ferries from Sicily to the Aeolian Islands leave from here, therefore you have to get used to the swell at the berths, if you would like to stay here.

Anchoring near the black beach of Stromboli

Our culinary recommendations:
Make it a point to visit and enjoy, a typical Sicilian Rosticeria (for a summer-snack) and try fresh, stuffed arancini (stuffed and breaded, deep-fried rice balls)

If you are dining in a restaurant you should order Spaghetti ai Ricci di mare (spaghetti with sea urchin sauce), the unique appetizer of the region of Sicily.