❰ ❱
Okuklije on the Island Mljet offers all you need: protection, fresh seafood in one of its Konobas as well as nicest views
Korčula Island in front the southern coast of Dalmatia in the Adriatic Sea
Croatian bay
Island with lighthouse in the Adriatic Sea
Round Dubrovnik you can often see replicas of historical boats true to the original
sheltered bays in the east of Mljet
fortified city at the Croatian coast
Croatian marina
departure base of Bestsail - Pulena d.o.o. in Marina Spinut near Split
Sailing to Korcula
Home ❱ Cabin cruises ❱ cocktail - Croatia ❱ Cabin-cruise Croatia: Cocktail Elaphites
Cabin cruises

Day 1: Dubrovnik
Your cruise begins in one of the most beautiful places in Dalmatia or even the entire Mediterranean. As a Unesco World Heritage Site, Dubrovnik impresses with its majestic ramparts along the Adriatic coast as well as with its museums. Historical momuments have been preserved with international assistance. Gothic-style churches, monasteries, palaces and fountains can be seen in the old town, as well as Renaissance and Baroque buildings. We recommend taking your arrival day to visit the city before being received on our catamaran at 6pm. With a welcome drink, the skipper will present and the crew will have a chance to get to know one another during the first dinner on board. The first night is then spent at the dock in Dubrovnik. 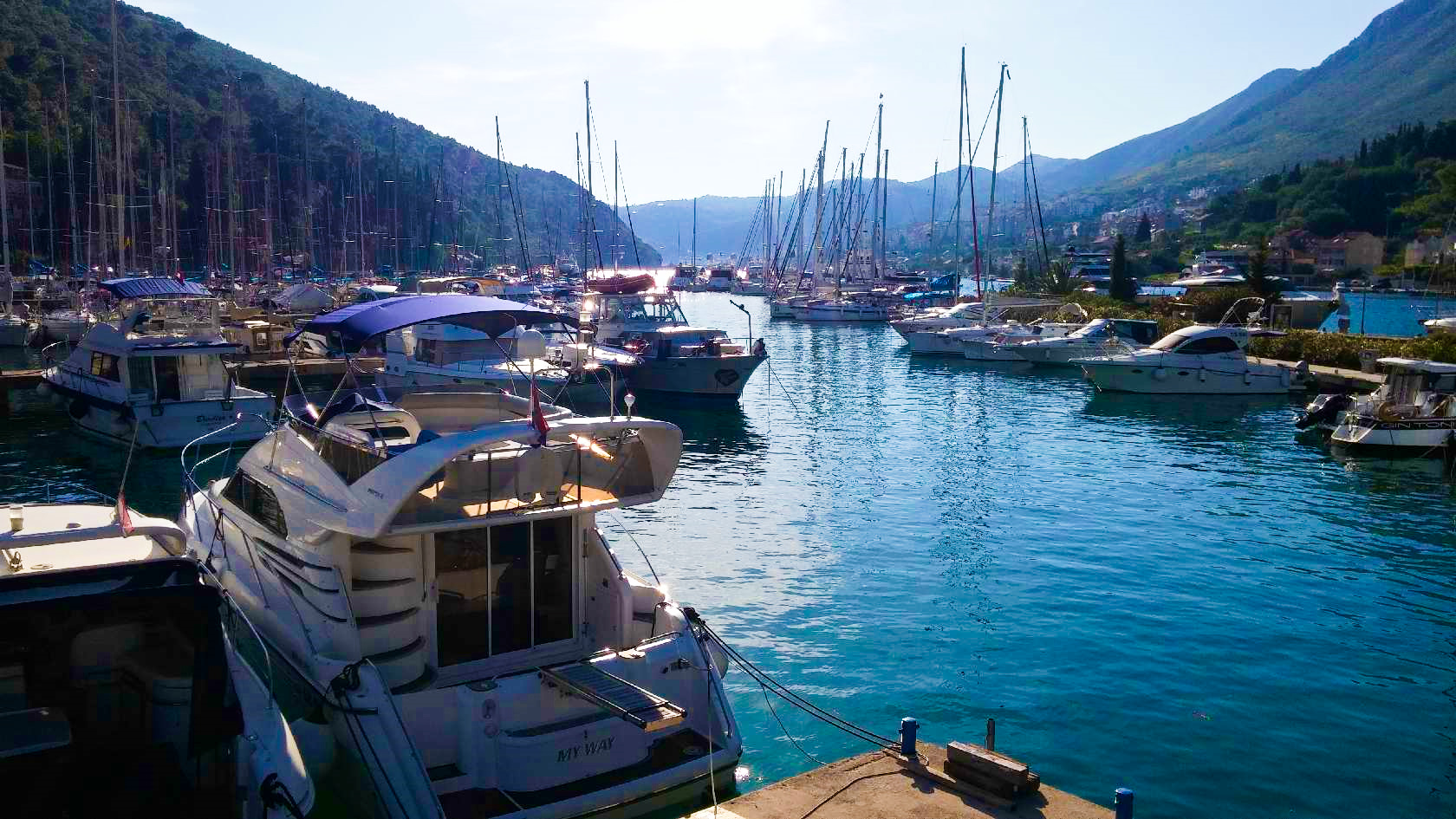 Day 2: Dubrovnik - Ston
The first sailing trip of your cruise takes you along the Adriatic coast past a chain of islands. You will dock in front of the town of Ston, a small medieval town, backed by a city wall in the south of the isthmus of the peninsula Peljesac. Famous for its oysters and its salt marshes, which have enriched the city since ancient times with salt.
Ston was a very important defensive zone for the Republic of Ragusa, with its incredible city wall. This "European Wall of China" is a remarkable feat of medieval architecture. The original wall reached 7 miles in length, 5 of which are still intact today. Tourists can wall along the wall, experience culture, swim and dine in fine restaurants. This first destination of your cruise will ensure that your afternoon and evening is varied and culture-filled.
Spend the night at anchor or at the dock in Ston. 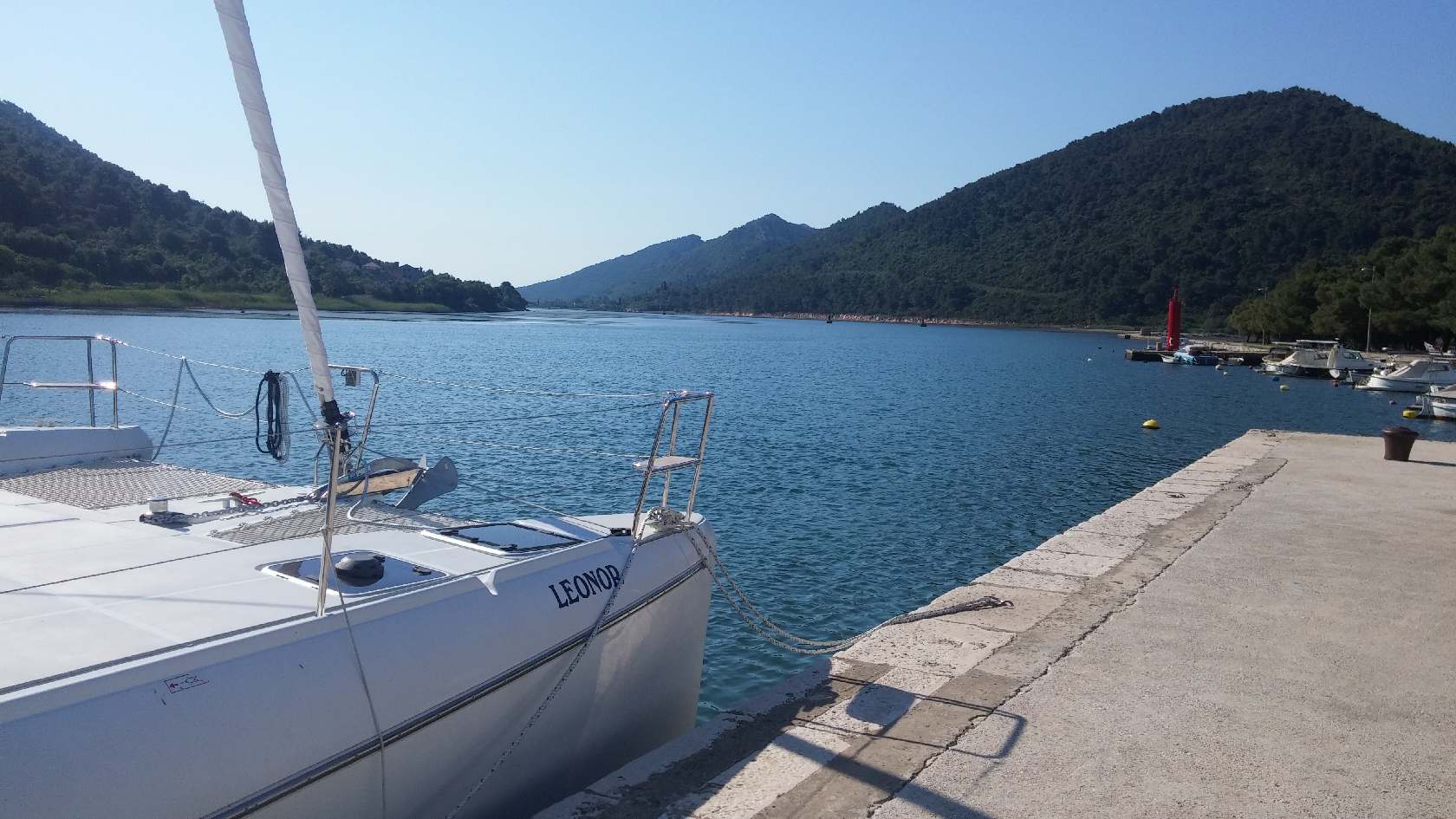 Day 3: Ston - Polace - Ile de Mljet
Today's route will bring you to the island of Mljet, located between Dubrovnik and Korçula.
Many consider this island the most beautiful in the Adriatic. One third of its 110km² is a national park with lush vegetation, including oaks, Aleppo pines and some endemic Dalmatian plants which give her the title Green Island. A beautiful endemic plant called Dubrovacka Zecina is the best known representative of them.
The island also has many beautiful sandy beaches and two large bays which are connected by narrow passages to the sea. In the larger of the two lakes is the island of Sainte Marie, a landmark of the National Park Mljet, with a Dominican monastery and 12th century church.
You will stop for the day and the night in Polace, protected in a large bay with the four small islands, Tajnik, Moracnik, Ovrata and Kobrava.
From the village Polace you can visit the inland lakes via small shuttle boats.
In this charming village you will find small restaurants, cafes and a supermarket.
Do not miss the Roman ruins of the eponymous palace Polac, the greatest symbol of that time in Croatia. Night at anchor.

Day 4: Polace - Bay of Zaklopatica, Lastovo
On the morning of day 4 the anchor will be raised to reach the island Lastovo, the farthest from the Croatian coast with the island of Vis for a relaxing cruise. Until 1989 it was the home of military bases and was therefore closed to tourists.
Traditionally, this archipelago was called "46 islands and 46 churches." Populated by almost 700 inhabitants, this area is about 55 km². Although forgotten by tourism, it offers many beaches and coves and spectacular coastline: A natural paradise for boating, snorkeling and hiking.
The wooded bay Zaklopatica, two kilometers from the village of the island is a popular anchorage. This offers a beautiful view of the island of Korcula, and waters are clear and calm. Night at anchor. 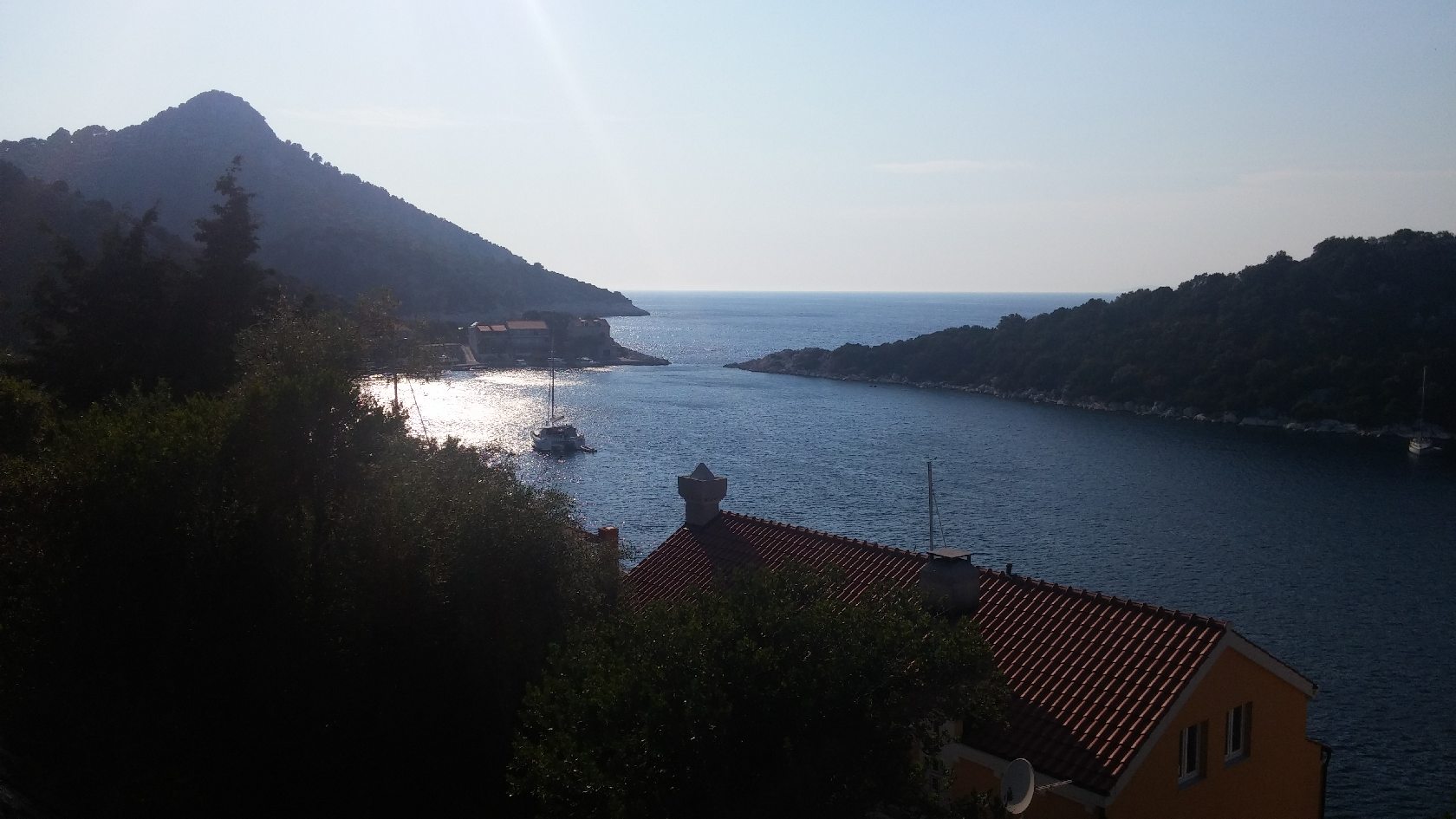 Day 5: Zaklopatica - Korcula
Day 5's destination is the famous island of Korcula, one of the most popular tourist destinations in the south of the Adriatic, with their wide range and amazing variety of landscapes.

Quiet beaches, secluded coves, hills and the green forests are part of this idyllic impression that you expect. Charming villages surrounded by vineyards and olive groves impress with their charm. The capital of this region is Korçula - an architectural marvel. This town features medieval houses and monuments from the late Gothic and Ettlich periods. Its mighty walls make it the little sister of Dubrovnik. The oldest inhabitants of Korcula speak an original language, a mixture of Greek and Roman Venetian styles influenced by international words, buoyant shipping and associated numerous visitors. Legend has it that Marco Polo, one of the world's greatest sailors, came from here. The house which is praised as his birthplace can be visited here. Overnight at the pier or at anchor on Korçula. 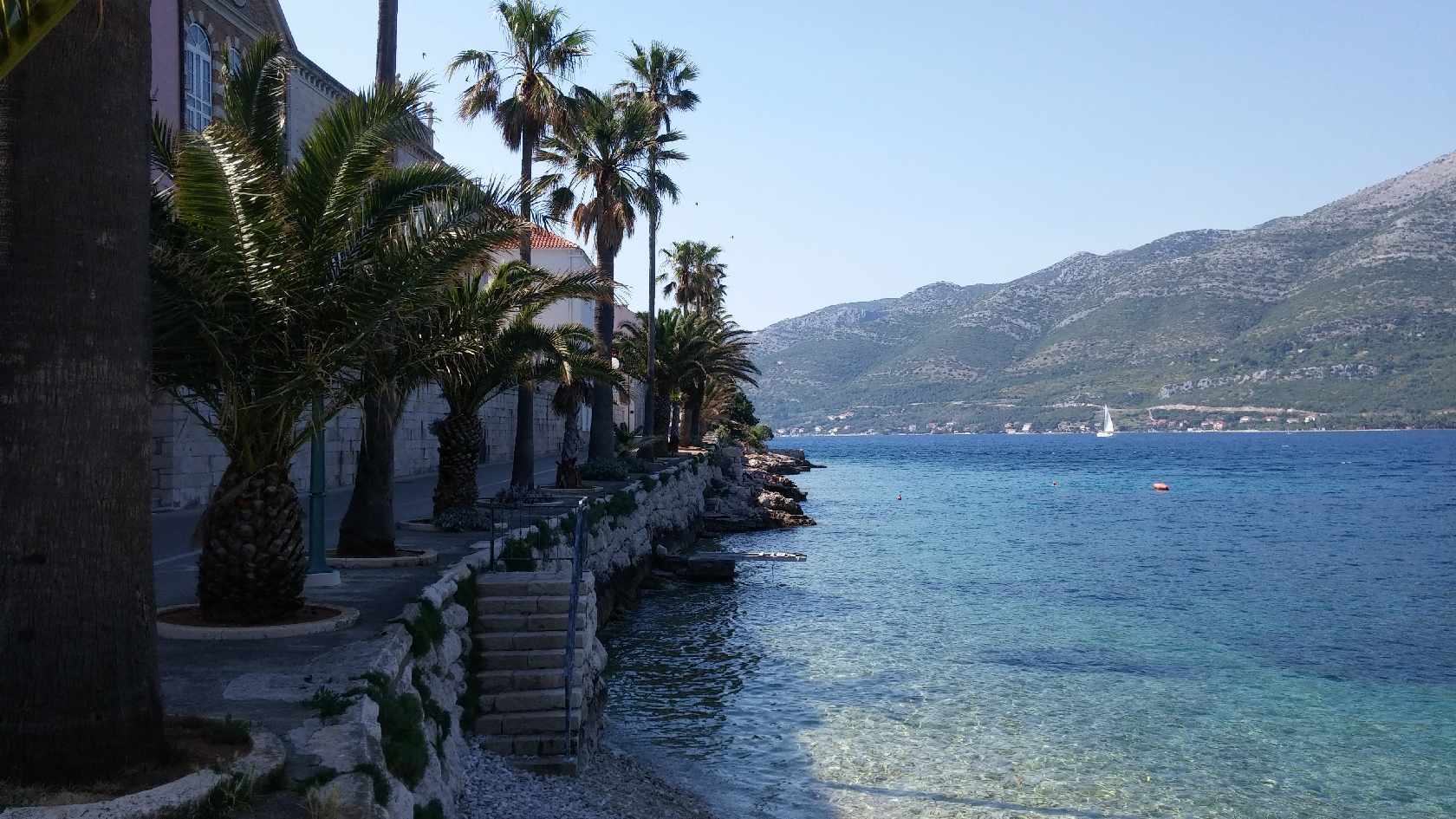 After navigation in the morning, this day is dedicated to the discovery of another bay of the island of Mljet: Polace.
This beautiful island was first mentioned by Homer in the Odyssey. Historians agree that it was located at the island of Ogygia. According to the legend, the nymph Calypso kept him there for seven years so that he would forget Ithaca.
Okuklje is an exemplary island village in Croatia. Charming, quiet, deeply embedded in the protected bay, Okuklje presents a dozen old stone buildings and a few good restaurants. The place has been selected by tourists as one of the best places in Croatia. Night at anchor. 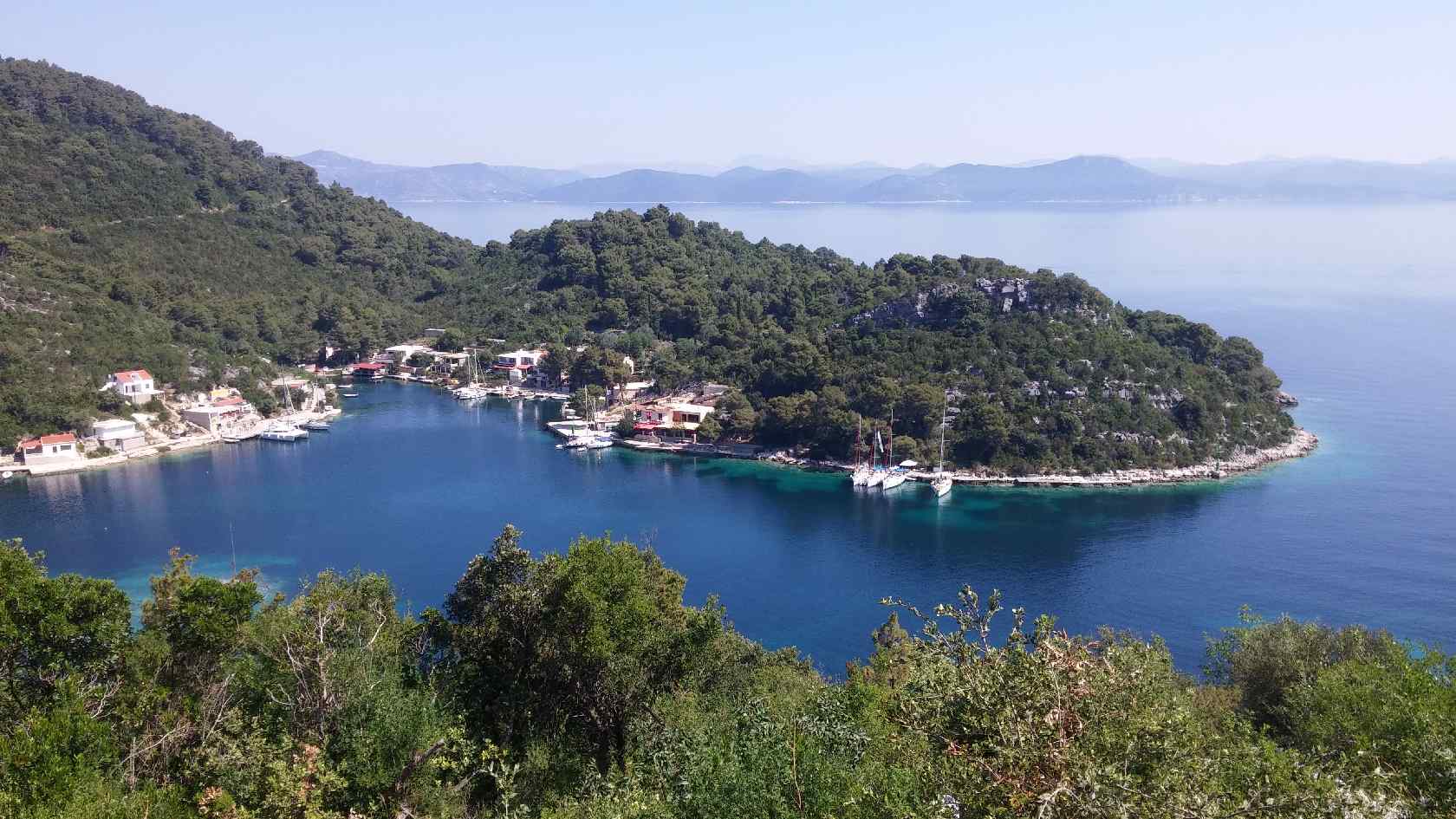 Day 7: Okuklje - Celo Bay, Island Kolocep - Dubrovnik
The most important stop on the last day of your catamaran cruise in Croatia is the small island Kolocep, the smallest of the archipelago with only 2.35km². Its inhabitants are called Kalamota. It is covered by a dense pine forest and surrounded by many hidden coves. The two towns Gornje Celo and Donje Celo lie in large bays and are home to only about 150 inhabitants each. Cars are prohibited on Kolocep.
The sea is turquoise and is a pleasure to swim in. For the athletic amongst you, the Blue Grotto can be reached from the bay on the south side of the island.
In the late afternoon you will leave this charming island to reach the marina Dubrovnik for the evening and the night. 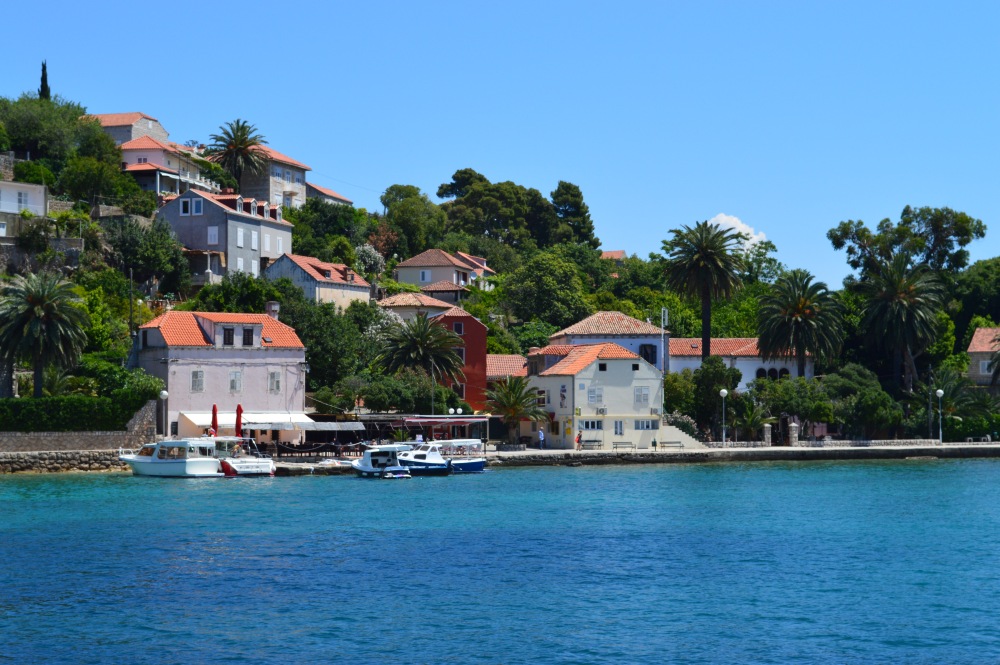 Day 8: Dubrovnik
After breakfast your sailing cruise ends at 9 clock.